In case you missed it on Friday 6/19, watch Boston Globe editorial page editor Bina Venkataraman interview Dr. Ibram X. Kendi about how to build an antiracist movement — and about his appointment to lead a new antiracism research center at Boston University, scheduled to open July 1.

6/18 - The Supreme Court ruled in a 5-4 decision that the Trump administration unlawfully ended the Deferred Action for Childhood Arrivals program. This decision nullifies the rollback of the program and will potentially allow new applicants to apply for DACA.

6/16 - The Small Business Administration reopened the Economic Injury Disaster Loan and EIDL Advance program portals to all new applicants. Additional small businesses and nonprofits will now be able to apply for long-term, low-interest loans and emergency grants provided by the SBA.

6/15 - The Supreme Court also declined to take up petitions from ten challenges to state laws established to limit the availability and accessibility of some firearms. One of these cases was a challenge to a Massachusetts state law involving bans on certain semiautomatic firearms and high capacity magazines. This is one positive step toward ensuring common-sense gun safety across the country.

6/19 - Governor Baker issued a proclamation declaring June 19, 2020 as “Juneteenth Independence Day” in the Commonwealth of Massachusetts.

6/19 - Governor Baker announced that step two of phase two of the Commonwealth's four-phase reopening plan will begin this Monday 6/22. Indoor table service at restaurants, close-contact personal services (with restrictions), retail dressing rooms (by appointment), and offices at 50% capacity will be allowed to reopen.

6/18 - Governor Baker did not hold a press conference today.

6/17 - The Registry of Motor Vehicles will exempt Massachusetts residents who renew their license or ID before 8/12 from the $25 fee to upgrade to a REAL ID next year. The RMV is not currently accepting appointments that are necessary to upgrade to a REAL ID. The federal government has pushed back the deadline for requiring a REAL ID to fly until Oct. 1, 2021.

6/16 - Governor Baker did not hold a press conference today.

6/16 - The Department of Conservation and Recreation announced it opened agency-managed spray decks, playgrounds, and fitness areas for public use in accordance with safety standards issued by the Executive Office of Energy and Environmental Affairs.

6/16 - Attorney General Maura Healey and 38 other attorneys general sent a letter to Google CEO Sundar Pichai and Apple CEO Tim Cook to flag concerns that there are contact-tracing apps available on Android and Apple devices that fall short in protecting personal information and asked the CEOs to remove contact tracing apps not linked to government or health officials.

6/16 - The MA Association of Community Action, the Boston Tax Coalition and Code for America are piloting a virtual VITA program to provide free tax prep assistance online. The Red Cross of MA set up a Virtual Family Assistance Center that provides virtual programs, information, referrals and support services for those who have lost a loved one to COVID-19.

6/15 - Governor Baker announced there will be more than 50 pop-up COVID-19 testing sites available on Wednesday 6/17 and Thursday 6/18. Those who have recently participated in large gatherings were urged to get tested. Testing was free and open to everyone, including those who are not showing symptoms.

This Wednesday 6/24, the MA House meets in a full formal session to consider H4707, An Act making appropriations for the fiscal year 2020 to authorize certain COVID-19 spending in anticipation of federal reimbursement, a roughly $1 billion supplemental budget filed by Gov. Baker in May. Once passed, this spending bill will enable the Administration to seek money available from federal pools to cover COVID-related expenses.

6/19 - Governor Baker filed a $5.25 billion interim spending bill that approves funding expenses to cover the month of July at the same funding level that was approved for FY2020.

6/18 - I cosponsored An Act to make Juneteenth Independence Day a State Holiday filed in the House by Reps. Maria Robinson, Bud Williams, Mindy Domb and Chynah Tyler, and in the Senate by Sens. Brendan Crighton, Sonia Chang-Diaz and Jo Comerford. Juneteenth commemorates the emancipation of enslaved people in the United States.

I also signed onto A Resolve Establishing the Truth and Reconciliation Commission, offered by Senator Collins and Representative Miranda, which would create a commission of experts to investigate and study race relations in Massachusetts, including but not limited to slavery and interactions with slave fueled-industries and institutionalized racism. The commission would also be charged to put forth legislative solutions, including ameliorative race-based policies and racial justice initiatives.

6/17 - Governor Baker introduced legislation that would create a licensing system for police and other law enforcement officers. This legislation would require officers to get certified every three years and would create a process for decertification that involves community input and immediately decertify officers that use a chokehold or excessive force. It would also create incentives for training programs. MA is one of four states without such a system.

Last week, I co-sponsored An Act to Save Black Lives by Transforming Public Safety. Filed by Representative Liz Miranda and Senate Majority Leader Cynthia Creem, the proposal takes important steps in the direction toward equity and justice.

The bill seeks to set new standards for police conduct, end dehumanizing police practices, add public accountability where none existed, and ensure robust oversight and implementation of lawful consequences for the breach of public trust. Additionally, it would prohibit the use of choke holds, eliminate no-knock warrants, and create an affirmative duty for any officer to intervene when they observe unnecessary force.

So far, these requirements have gained broad support as important minimum standards. Many additional reforms will be implemented by cities and at the federal level; this bill addresses important interventions at the state level, particularly around the use of force limits, standards and data collection, and reporting requirements.

Help get the food you need - 1 out of 9 people in Massachusetts receive SNAP benefits.

Apply BEFORE you begin receiving unemployment.

As of 5/29, you can use your EBT card to order food online (via Walmart or Amazon, so far, delivery fees not covered). For your questions, read the FAQ. 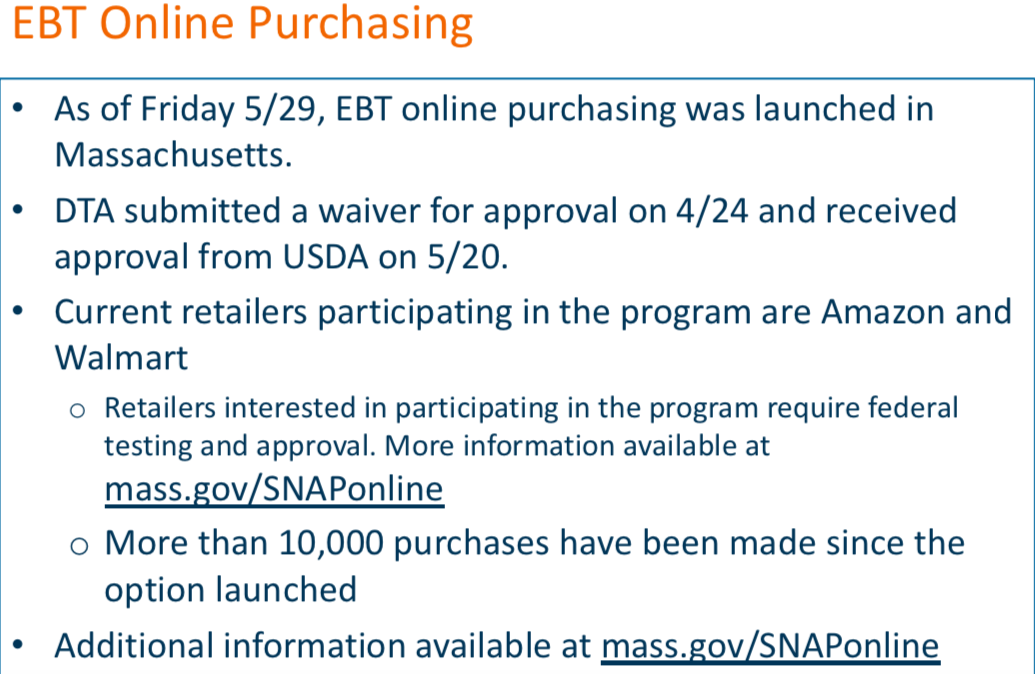 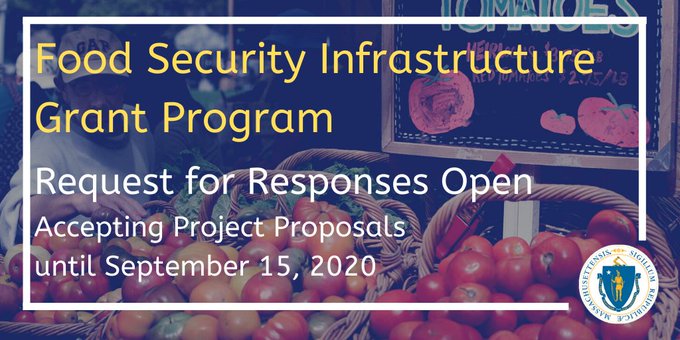 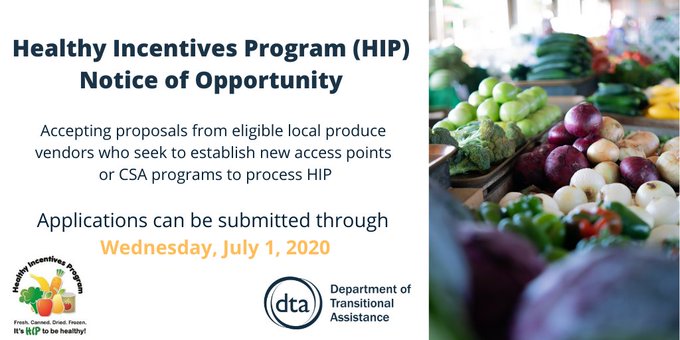 The goal of the Food Security Infrastructure Grant Program is to ensure that individuals and families throughout the Commonwealth have access to food, with a special focus on food that is produced locally and equitable access to food. The program also seeks to ensure that farmers, fisherman and other local food producers are better connected to a strong, resilient food system to help mitigate future food supply and distribution disruption.

Eligible proposals include, but are not limited to, projects seeking to:

In addition to the Food Security Infrastructure Grant Program, the Administration also announced $5 million in new funding for the Healthy Incentives Program (HIP). To leverage this state funding, a Notice of Opportunity has been released to allow new agricultural vendors to apply to participate as HIP vendors.

Eligible vendors include farmers’ markets, farm stands, mobile markets, and community-supported agriculture farm share programs. Applicants will be evaluated on their ability to respond to the needs of communities and populations impacted by COVID-19, establish HIP access points in areas with limited existing HIP access points or other food access barriers, distribute food in ways that limit the transmission of the novel coronavirus while reaching vulnerable populations, and a demonstrated capacity and commitment to serve SNAP clients in culturally appropriate ways. Applications can be submitted through Wednesday, July 1, 2020.

The international/national fraud scheme caused many folks receiving benefits since March and April to suddenly and inexplicably get cut off or their account to become frozen. If you're not receiving the benefits you're due, please send me an email: liz.malia@mahouse.gov

This week, my colleague Rep. Tram Nguyen of Andover, the first Vietnamese American woman to serve in the MA Legislature in her first term, led a joint letter to the Governor around the federal and state unemployment systems.

I'm grateful to Tram for tracking and compiling all the issues, for her keen legal eye, and for the opportunity to sign my name. Hopefully, our advocacy helps move the needle in the right direction.

The Massachusetts Department of Conservation and Recreation (DCR) will be hosting a virtual public meeting to discuss the Arborway Parkway Improvements Project.

If you plan to participate, DCR encourages you to register in advance, which will support smooth facilitation of the meeting.

Statement on the Supreme Court decision on DACA:

Updates on summer programming and other City resources:

Investments in arts and culture:

New round of grants administered through the Boston Resiliency Fund:

“[Juneteenth] is a monumental day for our nation and our city. It’s a day when we commemorate the end of slavery and we honor the Black community’s role fighting for their rights and making us a better nation. Tomorrow we’ll be raising the Juneteenth flag at City Hall, to honor this history and our Black community. And we have a web page up at boston.gov/juneteenth to share information and resources. Normally I would be joining community celebrations at Franklin Park and elsewhere. This year is different. But Juneteenth is as important as ever, because the legacy of injustice, and the fight for freedom, continue today. We’ve come a long way in Boston, but there’s so much more work to be done. We started taking some more steps last week, and there will be more to come. But I want to urge everyone, from every race and background, to reflect on what this holiday means; reflect on the suffering and injustice that Black people experienced and continue to experience; and reflect on the history behind the issues we face today. In 2020, we acknowledge the role we all have to play in breaking down systemic racism once and for all. This is a time to make history and move forward.”